A new era has begun for everyone’s favorite web-slinger with Marvel’s Spider-Man: Homecoming and fans of the wall-crawler are sure to love the latest version of the Spidey. With a perfect blend of slick action, a great cast, and the right amount of teenage angst,  Jon Watts delivers a compelling coming-of-age Spider-Man film everyone can relate to. 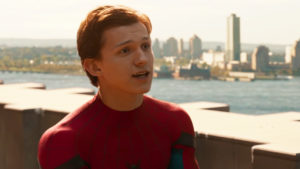 The first installment of Spider-Man in the Marvel Cinematic Universe finds Peter Parker back in high school, bored with the daily routine of being a typical teenager. The turmoil of a hero trapped inside a teenagers body and the normal range of pubescent insanity is the driving force of this version, and ultimately what sets Tom Holland apart from the other actors who have pulled on the red and blue suit. Holland is a kid, playing a kid, and it shows. Spider-Man is not 30 trying to play 17. Holland brings a new level of credibility to the story of a kid bitten by a spider and embarking on a new adventure.

Parker spends his time in class watching videos of his debut in the epic airport battle from Captain America: Civil War. Endlessly dreaming of being a hero like the larger-than-life figures he fought along side, Parker is convinced he is up to the challenge. One problem: much like most kids his age, he is nowhere near ready for the big time.

Not only does Spider-Man get the joy of trying to grow up, he also has to deal with the Vulture, who shows up to make it that much more challenging. In what may be one of the better Marvel bad guys, Michael Keaton delivers a solid performance as the first villain of the new Spider-Man world. Distraught over losing a government contract hauling alien matter from the Battle of New York, Keaton dons the alien tech-enabled Vulture suit and steals the parts he needs to manufacture alien weapons. Spider-man comes in contact with a couple of the weapons and knows he is the one to stop Vulture’s plan.

Peter can’t do it alone. Neither can Spider-man. Everyone needs help along the way, and he is no different. Parker gets his help from a strong supporting cast and a group of fresh faces. Jacob Batalon delivers my favorite supporting performance as Peter’s best friend, Ned. Batalon steals most of the scenes he is in, and the chemistry between he and Holland makes for some of the more natural and believable moments from Homecoming. 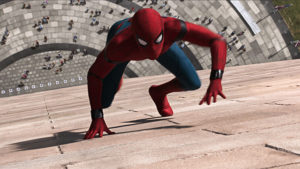 Not to be outdone, a few Marvel regulars join the fray to help keep Peter pointed in the right direction. Robert Downey Jr. is back as Tony Stark and Happy Hogan (Jon Favreau,) is never far behind. Tony is the mentor with very little time to devote to the aspiring hero, and Happy gets the job of babysitter. Marisa Tomei is back as Aunt May, and, well, Marisa Tomei. Not much needs to be said there.

Yes, there are your typical cliche moments, as with most comic book movies. Yes, it is too long, at just over two hours. No, this movie is not ground breaking, and it fits a mold commonly found in the Marvel Cinematic Universe. None of that matters in the end.

Spider-Man: Homecoming is exactly what the title says…a homecoming. Spider-Man is back at Marvel and they give the fans what they want, a fun journey with everyone’s favorite neighborhood Spider-Man. Everything comes together and sets up a world where Spider-man will be a key player.