The Dark Knight looms as the overwhelming favorite 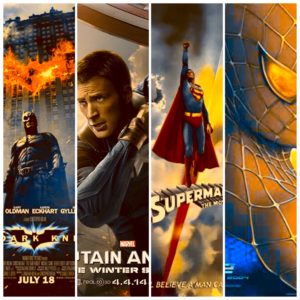 The Reel Hooligans podcast has announced it’s 64-movie field for their upcoming Hooligan Madness tournament to determine the Best Comic Book Superhero Movie ever. The Dark Knight (2008) was named as the overall #1 seed of the tournament and landed in the Multiverse Region of the bracket. Captain America: The Winter Solider (2014), Superman (1978) and Spider-Man 2 (2004) were also named top seeds in the Golden Age, Cinematic Universe and Modern Age Regions, respectively.

Nearly 160 movies were considered dating as far back as the 1966 Batman and as recently as the upcoming Spider-Man: Far From Home. The movies where narrowed down to 64, then split up into 4 regions — The Golden Age, The Modern Age, The Cinematic Universe and The Multiverse.

You can see a full list of the movies and seedings in their regions below.

The first two rounds of the tournament will be determined on Sunday July 7, when the Reel Hooligans record from the Screenland Armour movie theatre in Kansas City, Mo.

Subscribe to the Reel Hooligans podcast on Spotify, iTunes, Podomatic, GooglePlay or wherever you prefer to find your podcasting entertainment.