The Princess of the Amazons proves women have box office power 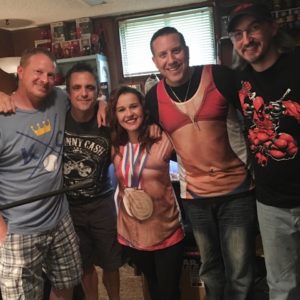 From left to right: David, Tim, Dyani, Corey and Alan.

A good DC movie? A female led superhero movie?? What the hell is going on??? Must be the end of the world. Nope. It’s just the Wonder Woman movie — finally, after all these years — and the Reel Hooligans are all over it.

Unfortunately, you won’t be able to hear what happened that led to the pic on the right here. Due to a technical glitch, our Game of the Week, Ladies First, did not make it into the podcast. But at least you get to see Corey and Dyani showing off the bad ass Baywatch shirts they earned as a consolation prize.

So, sit back, grab a cold one and your headphones and spend a little time with the Reel Hooligans and Wonder Woman.