You are here: Home  /  Movie Reviews  /  The Secret Life of Pets: Simple-minded, but fun 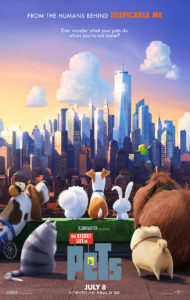 Most animated summer movies don’t offer much of an intellectual challenge to its audience — unless it’s Pixar — but they don’t always hit the mark.

So, it’s not to be unexpected that The Secret Life of Pets, which is brought to you by the same studio that forced Minions on us last summer, isn’t exactly a wildly original movie.

But it is fun — for the most part, anyway. And it isn’t completely stupid or obnoxious; and considering the target audience is small children and pet owners that may be considered a tiny miracle.

The Secret Life of Pets is an adventure that takes place behind closed doors. Or at least when owners go to work (or whatever they do when they leave for so long) 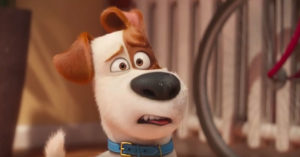 Louis CK voices a goofy little insecure dog named Max who overreacts when his owner gets a gigantic new bear of a dog, Duke (Eric Stonestreet). The end up on a whirlwind adventure through the city, avoiding animal control and wild gangs of strays led by an obnoxious white rabbit (Kevin Hart, but you knew that when I said obnoxious…) 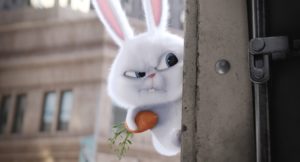 The movie is populated with a lot of fantastic voice talent (Albert Brooks, Jenny Slate, Ellie Kemper), but nobody recognizable enough to distract you from enjoying the rich characterization of these colorful pet characters.

I’m just messing with you, there isn’t a whole lot of characterization here. Mostly, it’s cute animals doing cutesy things that will make the kids happy and distract them from the fact that nothing is really happening. It’s fun, uninspiring, but mindless fun.

Big kids — yeah, you adults — don’t think you’re getting off easy here. If you’re a pet owner, have owned a pet or just in general kinda like animals, you’ll probably be able to identify or relate to any one of these characters; and they tap into just about every pet species you can think of. Whether you’re a dog person, a cat person, or whatever in between, you’ll find something to give you even a little bit of a chuckle. 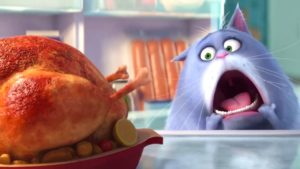 It’s not a particularly smart movie. Not as smart as it wants to be anyways. It plays like the animal version of Toy Story, but it doesn’t have the heart of that Pixar classic. Mostly because it never plays into the idea

Thankfully, the humor plays it pretty safe without shooting to low-brow for the the kiddos. There’s nothing worse than a clever animated movie ruined by a bunch of fart jokes. Kids are smarter than that and while Pets won’t challenge anyone, it’s certainly not talking down and dumb to anyone either.

The best thing the movie has going for it is the animation, which helps give each of the animals a unique personality, and at times, very life-like.

The Secret Life of Pets, in most summers, might be ultimately forgettable. But 2016 has been a struggle, and this one is just cute, silly, and endearing enough to make for a fun summer escape for the family.

MPAA rating
PG for action and some rude humor