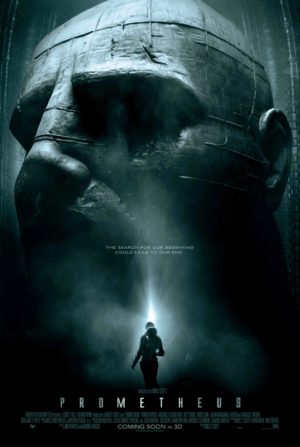 Prometheus has been described as a DNA prequel to the 1979 classic Alien and the three sequels that followed, as well as the forgettable Alien vs. Predator movies. While it isn’t as scary or compelling as the original movie, it’s far superior to any of the others — well, aside from Cameron’s Aliens, obviously.

There really isn’t much to say about the film’s plot without giving too much of it away and ruining your enjoyment of what unfolds over the just over two hours of running time. The film is titled after the Greek God, Prometheus, who wanted to even the playing field between humans and Gods. To do so, he stole fire from Zeus and gave it to the humans. Prometheus was punished and today serves as a representation for humankind and their quest for scientific knowledge.

As a film, Prometheus centers around a group of scientists in 2089, who discover a series of unrelated cave drawings depicting a man being worshiped and reaching (or pointing) to a group of stars. An expedition to space is commissioned by Peter Weyland (Guy Pierce), an eccentric scientist and billionaire, who seeks to discover the origins of the human race. Weyland sends a ship, the Prometheus on a do or die mission to the planet LV-223, where they are met with more questions and of course some freaky symbiotic monsters.

The crew of the Prometheus includes Idris Elba (Thor, The Losers), Charlize Theron (Snow White and the Huntsman, Young Adult), Noomi Rapace (Sherlock Holmes: A Game of Shadows) and Michael Fassbender (Inglourious Basterds, X-Men: First Class.) All of them are quite good here, especially Fassbender, playing an android named David, who models himself after Peter O’Toole’s character from Lawrence of Arabia. David’s creepy mannerisms are both innocent and questionable as he tries to understand the motives of his human shipmates even as he seems to have his own agenda. 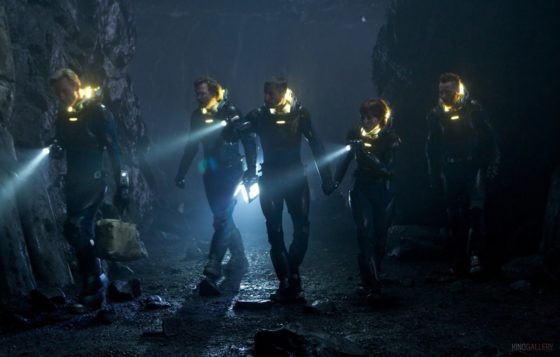 Director Ridley Scott’s return to the world of science fiction is a welcome one. Along with screenwriters Damon Lindelof (Lost) and Jon Spaihts, the movie does an amazing job of taking audiences back to the world introduced in Alien without becoming a forced retread of anything that happened in that movie series. Make no mistake, this is a prequel and only teases you with its relationship to that original movie. It is its own movie and its own world and at times seems to be strained to maintain its own description as DNA prequel. Scott lays the groundwork for a new trilogy, but also acknowledges where its all heading.

Part of the problem with the movie, however, is that it raises more questions than it answers, which may frustrate some audience members who aren’t willing to make a long-term commitment. Of course, if you’re followed Lost at all, this should par for the course. There are a lot of big ideas introduced but not quite followed through on. Like Lost, it requires a lot of reflective thought and discussion following the movie, which may alienate some of the audience who go in expecting face huggers and xenomorphs.

The last act of Prometheus feels a little rushed and there are many things that are left unanswered but there is a promise that answers are coming. But do we need these questions answered? Do we need to understand where the xenomorphs come from? I don’t. This was the part that frustrated me, even as I enjoyed the flick as a whole — although I may be in the minority. I’m all for the journey to discovering the mystery of the human race, but I feel like Sir Ridley is gonna start asking questions that don’t need askin’.

The film is a visual masterpiece and while it may not be an instant science fiction classic, it is an interesting set up for a new franchise that will eventually lead to the events of Alien. The 3D works quite well to enhance the experience but is a luxury and not a necessity to enjoy the film. This movie is its own beast and it’s a lot of fun, but it will be interesting to see where Scott takes this franchise. Let’s just hope he doesn’t spoil the fun.