The Hand has big plans for New York City 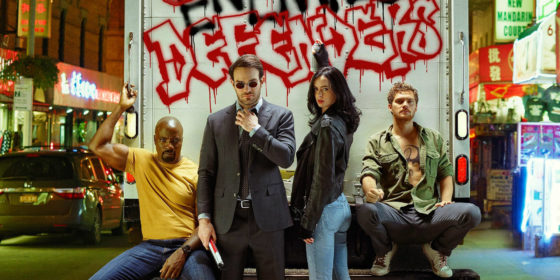 Who would have guessed that a lawyer with anger issues, a helpless drunk, an escaped convict and a rich boy raised by monks would ever team up to save the people of New York City? An exciting new trailer for Marvel’s original Netflix series, The Defenders, was released last night at the San Diego Comic Con. The show will bring together Charlie Cox as Daredevil, Krysten Ritter as Jessica Jones, Mike Colter as Luke Cage and finally Finn Jones as Danny Rand.

This group of self-centered individuals are being forced to put their own shit aside to take on Alexandra, their toughest adversary yet, played by the renowned, Sigourney Weaver.

In their own way, each members of the Defenders are trying to make a difference in the world despite having drawn the short end of the stick in life. They are all marked by a tragic past that has unknowingly brought them together to serve a greater purpose. The Defenders try to stand up for the little guys and make sure that their voices are heard, while the Avengers handle more nuclear level threats.

The notorious criminal organization The Hand, led by Weaver, has been mentioned throughout each of the four characters individual arcs. We have yet to see them unleash their full wrath on the city and that scares me because there has been so much build up that by know expectations are high. There are sure to be bad ass fight sequences as these strong personalities clash in this new mini series.

The Defenders panel at SDCC gave audience members an exclusive first look at the show’s first episode as well as a sneak peek of The Punisher trailer which stars Jon Bernthal.

Marvel’s The Defenders by Douglas Petrie will be released in August — and it is rumored that the Punisher might make a guest appearance in the show.