The ultimate battle for the Greatest Sports Movie of All-Time begins! 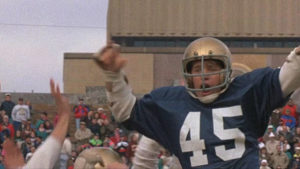 This week on Reel Hooligans!! — Introducing Hooligan Movie Madness!! Tim and the Reel Hooligans will crown the BEST. SPORTS. MOVIE. EVER!! — with a 32-movie single elimination tournament to crown a champion and determine once and for all, the greatest sports movie EVER!

Read the interview: Talking baseball and life in the 80s with the cast of ‘Everybody Wants Some!!’

Sports. Movies. and a game designed to frustrate my Hooligans!

Episode 102: Reel Hooligans versus The Underdogs of Infinite Madness